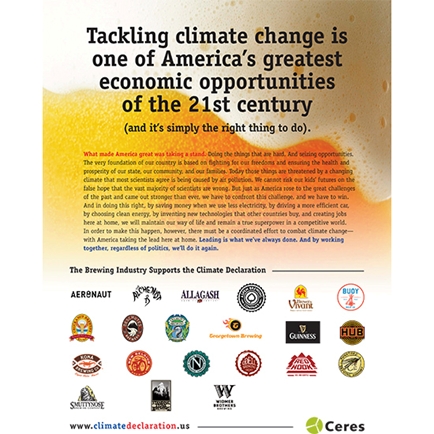 In honor of National Beer Day, raise a glass with one of these 24 breweries that are committed to producing sustainable beer! FWx, FOOD & WINE’s new lifestyle site, recently released a list of elite breweries that have declared their focus on sustainability and green beer- and we aren’t talking about the kind that has dye in it. Here we are referring to brands who like us, have committed to delivering sustainable products.

In a call for action on climate change, breweries have signed a Climate Declaration, which is desccribed as  “a business call to action that urges policymakers to seize the economic opportunity of tackling climate change.” Industry leaders such as New Belgium Brewing in Colorado and Brewery Vivant in Michigan became the first LEED-certified brewery in America in 2012, and many others have since followed their lead.

Among the list of companies that have signed the Brewery Climate Declaration are brands such as Guiness, The Alchemist and Smuttynose Brewing Company. For a complete list, visit FWx.